Our object of the week is an intact Roman glass toilet bottle, usually called an unguentarium. This name seems to be a 19th Century invention, based on the ancient Roman term “unguentarius,” a word used to describe sellers of perfumes. This type of glass vessel is believed to have been used for dispensing perfumed oils for both daily and ritual use. The actual Roman name for this type of vessel is unknown, despite the form being relatively common. 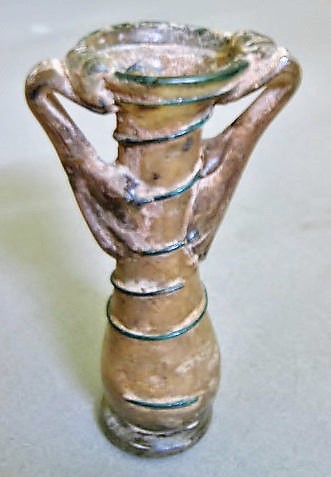 Our example is structurally intact. The vessel consists of a long bag shaped body, wider and rounded towards the bottom, with a tall narrow neck that widens to a rim that has been thickened by folding it back over itself. Around the body is a thin trail of glass, applied while molten, making seven full revolutions around the vessel, starting from just above the base and ending at the rim. A pair of chunky handles are attached very thickly to the midpoint of the vessel, are pulled outward and meet it just below the rim. Much of this decorative trailing is still intact. There is some encrusted reddish soil inside the vessel and in recessed areas of the exterior, obscuring the vessel’s original color. The original glass color, which is a transparent green-blue, may be seen clearly at the top of the vessel in the first image above. The vessel sits on a thick, round pad base. When the glass worker was attaching the completed vessel to this base he did so slightly off-center, which may also be seen most clearly in the first of two photographs above.

Unguentaria were first made popular in the Hellenistic period but these were mainly of pottery. Many of these have survived, making them rather inexpensive today, and a few are available on our eBay and Etsy stores. While the pottery types continued into the Roman period, it was the development of glass blowing, making glass a common and affordable commodity rather then the preserve of the wealthy, that made our vessel possible. Blown glass unguentaria have survived in countless forms. The Corning Museum of Glass’ printed and online catalogs of unguentaria list dozens of distinct variations, though few have the twin handles of our example until the middle and late Roman period. Our example was made in the Eastern Mediterranean, probably in the coastal region of what is now Israel/Palestine and Lebanon This form continued on and developed in new directions during the early Byzantine period in the Near East and changed again with the advent of Islamic rule in the region.

This vessel was part of a large collection of antiquities formed by a Welsh collector between the 1970s and 2008, drawn from the UK and European art markets. The collection was dispersed at auction by Bonhams, London, Sale #16777, 29 April, 2009. this object was part of Lot # 302.

For those interested in purchasing this item, you may find it here —

Our Etsy store (opens in a new tab or window) – https://www.etsy.com/listing/261567267/roman-glass-unguentarium-late-3rd-4th?ref=shop_home_active_8

To learn more about unguentaria and ancient Roman glass in general, we recommend the following printed and web resources —

Because these printed resources are quite expensive, we also recommend online research. The Corning Museum of Glass has a tremendous online collection of ancient glass, especially Roman. A simple search for the word “Ancient” with an image brought up 4,644 results (new tab or window) – http://www.cmog.org/collection/search?f[0]=bs_has_image%3A1&f[1]=im_field_object_work_type%3A299021&solrsort=

Also useful is this exploration of Roman glass from the University of Pennsylvania Museum (new tab or window) – http://www.penn.museum/sites/Roman%20Glass/index.html