Our object of the week is an unusual type of pottery oil lamp dating from the later years of the Roman Empire, not long before the full transition of the Empire’s eastern half to what we now call the Byzantine Empire. This general type of pottery lamp seems to have been manufactured at workshops in northern Syria, and possibly further south into what is now Lebanon, over a period of nearly 200 years. Our example seems to date to the earliest phase of production and features some quite unusual characteristics, outlined below.

The most obvious and uncommon aspect of this lamp is the long, pointed handle. Most late Roman and early Byzantine period lamps manufactured in the Near East feature short handles of spike or thumb shape. The long, rather delicate form of this lamp’s handle is both aesthetically pleasing and uncommon. 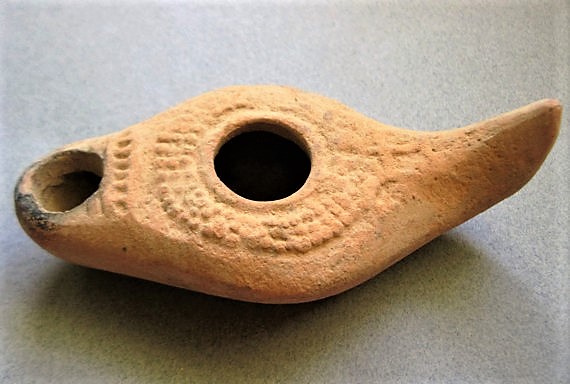 The other interesting aspect of this lamp is its combination of decorative elements. The raised pellets around the central fill hole were a common theme on this broad category of lamps over a long period. But the cross-like image in low relief at the rear of the lamp, and continuing upward onto the handle, is puzzling. At first glance, this appears to be a Patriarchal cross, a type featuring two cross bars over the central vertical bar. But this type of cross did not appear in any numbers until the 9th and 10th Centuries in the Byzantine Empire. An alternative explanation might be that this was an attempt to depict the so-called “Tau” cross, the simple T-shaped crosses on which criminals were sometimes executed in the Roman Empire. But the image is still vague. In our opinion, any attempt to assign this cross-like relief image to a specific type of Christian iconography is no more than guess work.

Just as baffling is the maker’s mark or decorative element on the lamp’s flat base, shown below. Connected to a stylized palm frond that runs the length of the nozzle’s underside is a radiating sixteen pointed element set inside concentric raised circles with simple hatching between them. At first glance, this starburst design looks for all the world like the Union Jack on flags from Great Britain. But closer inspection shows another set of eight spokes in much lower relief between the eight main spokes. Is this a maker’s mark or is it simply a pleasant design? And in either case, does it carry any early Christian symbolism, as it resembles both a cross and a Chi-Rho symbol or Christogram? 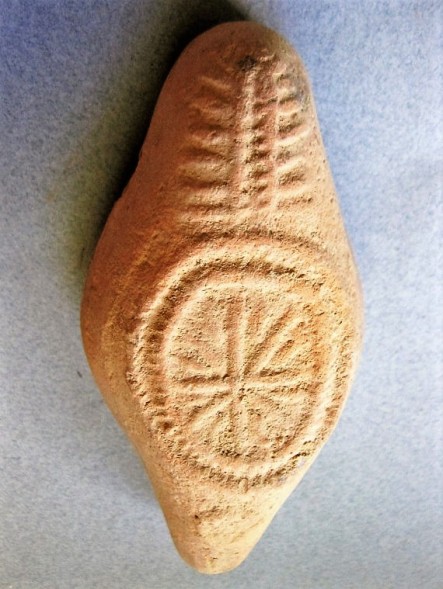 In view of the date at which this piece was made, around 400 AD, and the combination of decorative elements (a possible cross on the upper surface, a palm frond – an image re-purposed from Pagan antiquity – and the cross-like design on the base,) it seems most likely that this lamp was made for sale to Christian customers. However, it is worth noting that at least in the Levantine region, pottery lamp makers did not seem to favor a specific category of client. Whether Christian, Jewish, Samaritan or Pagan, lamp makers seem to have created products for all types of customers and with all types of imagery.