Our featured object this week is a fine example of a type of personal adornment that was popular in the Near East, particularly in Egypt, the Levantine coastal region (today’s Israel / Palestine and Lebanon), and greater Syria, including what is now southwestern Turkey, from the Hellenistic period right through the Roman, early Byzantine and Islamic periods. This glass bangle was made during the 13th to 15th Century, probably in what is now Syria or Israel / Palestine. This was an era in which Islamic glass artists dominated, with their products being highly sought after both in Europe and in the East. Their technical achievements would not be surpassed for a few centuries more, with the Venetian revival of glass making techniques from classical antiquity. This example is of rather more humble origins than the elaborate vessels and mosque lamps made in Medieval Islamic Syria and Egypt, but is still beautiful. 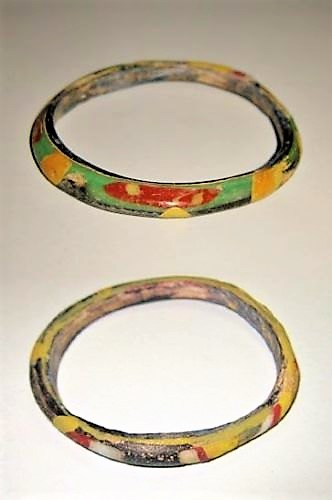 Simple monochrome glass bangles first became common in the region during the later part of the Hellenistic period. During the Roman era, particularly in Egypt, these came to be made from multiple colors of glass. With only minor interruption, these continued into the early Byzantine period. They became really widespread during the Islamic era and were still being made at the small glass workshops in Hebron right up through the end of Ottoman rule in 1918. Bangles were fast and easy to make: a few chips of different colors of glass could be melted into a thick cane that would form the background or base color. The cane would then be stretched and one end attached to the other, before polishing the surface in the flame and evening out any irregularities. In later examples, from the 17th Century through to the early modern era, an additional cane of one or more colors twisted together in a spiral would often be added to the outside of the bangle or to both the inside and outside edges. This additional component is a sure sign of a very late date for Islamic bangles.

As a cautionary note to readers, there are many “low end” antiquities dealers, particularly online, who occasionally offer objects of this type and invariably refer to them as Roman, rather than Islamic. This is simple intellectual laziness and indifference to the objects themselves. There is a considerable body of published work available to assist anyone with an interest in ancient or medieval glass with distinguishing glass bangles and other objects from one time period to another. But lazy or dishonest sellers will simply label glass bangles as Roman, when the great majority of those on the market are in fact Islamic.

One printed resource that we highly recommend is the following:

Within this work, see catalog number 471 for a very similar example (also illustrated in color on Plate 35), and Figure 85 for a group of similar examples of the 14th-15th
Century from the Islamic cemetery at Tel Dan.

This outstanding volume not only addresses ancient, medieval and post-medieval glass bangles in detail but is also an invaluable reference for dealing with items such as coin weights, amulets and beads. Beads can be especially difficult to date and Spaer’s work provides valuable technical data, particularly with regard to visible evidence of manufacturing techniques, to help the reader distinguish very similar types from one another.

This object is available on our eBay store here – http://www.ebay.com/itm/Medieval-Islamic-Multi-Colored-Glass-Bangle-/132036706096?hash=item1ebe003f30:g:CMoAAOSwBLlVYku~

and on our Etsy store here – https://www.etsy.com/listing/261524237/medieval-islamic-multi-colored-glass?ref=shop_home_active_18