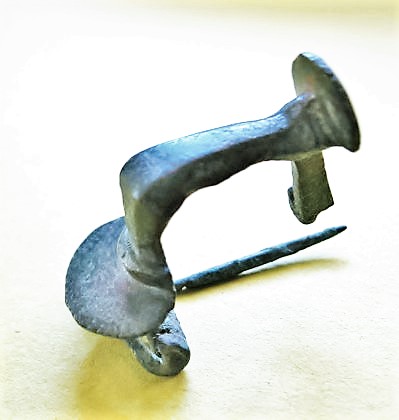 This week’s featured object highlights the nature of travel and mobility, as well as the adoption of regional clothing styles, in the Roman world. Among the countless varieties of Roman fibulae – brooches for securing clothing at the shoulders – there were some easily recognizable general categories, including plate brooches, bow brooches, disc brooches, etc. The earliest and by far the most common category of distinctly Roman brooches was the bow brooch. This simple clothespin-like form evolved into many shapes and styles, some of which were purely local. Our object for this week is a type of bow brooch that developed over time across a wide area, from the Roman Danube frontier in central Europe to England.

The earliest knee brooches, so named because of the dramatic bend in their bow, appear in the Roman province of Pannonia, what is today the Danube region of Hungary and Croatia, in the early 2nd Century AD. These have a very “industrial” feel, with strong, squared edges and right angles, with only simple geometric decoration either cast or incised just above the catch plate. Later, in the second half of the 2nd Century, these develop a semicircular head plate which is often decorated with rouletting along the edge. In the Danubian region finds of knee brooches seem to be exclusively associated with military contexts, such as the forts along the upper Danube. 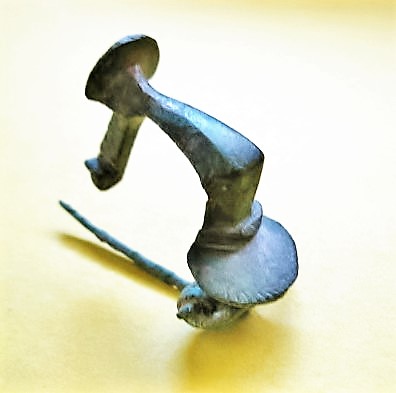 Upon arriving in Britain, presumably with military units reassigned from the Danube frontier, the knee brooch developed further. But instead of being found in strictly military contexts, Romano-British knee brooches, such as ours, are found as temple and shrine offerings, in civilian settings, and at military sites. Ours is very well preserved and shows the decorated semicircular head plate type in its fully developed form. The knee brooch continued as a common type in Roman Britain until about the beginning of the 4th Century, before being replaced by the crossbow type.

Readers interested in acquiring this object may find it on our Etsy site here – https://www.etsy.com/listing/261523289/a-large-roman-bronze-knee-brooch-150-250?ref=shop_home_active_90