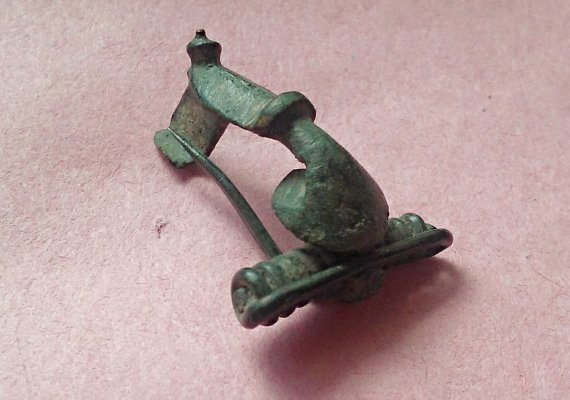 One group of artifacts making up a large proportion of small bronze objects available on the legitimate antiquities market is the fibula or brooch —  an ornate pin, usually made of copper alloy but sometimes of precious metals or even iron, used to fasten and decorate clothing. Prior to the use of buttons becoming common with the introduction of new clothing types in late antiquity and the early Middle Ages, fibulae made in their many thousands were an absolute necessity for many social classes, and both sexes, in Roman society.

Our “Object of the Week” this week is a small, inexpensive but finely crafted and well preserved Roman bronze fibula. This is a variant on”Kraftig-profilierte” type brooch, dating to the 1st Century AD. Despite measuring little more than one inch long, this lovely piece displays a great range of line and form in its cast bronze body. 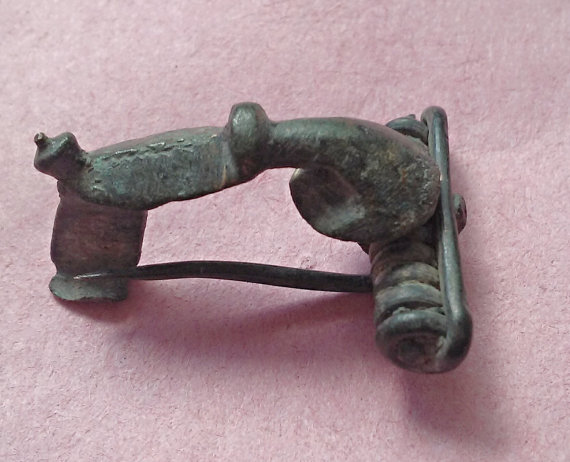 Fibulae already had a long history throughout what would become the Roman Empire. Many early Roman fibulae, including this week’s object, reflect prior local traditions and styles. While the great majority of Roman brooches were simple bronze sprung or hinged pins on a roughly bow shaped body with minimal cast, punched or filed decoration, some examples utilized more elaborate decorative techniques to enhance their otherwise simple form. A brooch’s owner might have an ordinary example enhanced to look “upmarket” with a layer of tin (to make it look like silver) or of silver or even gold or the addition of colored enamels or niello (black silver sulphide) in recessed areas. Fibula types evolved over time, of course, and varied greatly by region within the Roman Empire and beyond, meaning the range of types is truly enormous, including those dating from well before and well after the Roman period. The scope for collecting is great, particularly since the majority of types are quite affordable.

To purchase this item, click either of the URLs below –

There are many excellent resources for this specific area of antiquities collecting available in print. Here a couple we recommend: